Renewal at the management of one of the main business associations in the health and life sciences sector in Catalonia. CataloniaBio & HealthTech has updated its Board of Directors at the General Assembly, which was held today at the MGS auditorium in Barcelona. The same occurs after the previous Board of Directors, led by Jaume Amat exhausted the 4-year mandate established by the statutes of the association.

After the deadline for presentation and validation in January, the candidacy led by Joan Puig de Dou, CEO of Kymos, and Mariona Serra, director of GoodGut, a company of the HIPRA group, was confirmed as the only candidate to lead the organization for the next four years. Both Puig de Dou and Serra will share the presidency of the entity, and the role will change to the other in two years.

“We face the next four years with the will to continue with the growing line of the association, working for the nearly 200 members,” said Puig de Dou, already the new president. “We want to contribute to the consolidation of the business fabric of the sector in Catalonia, providing us with the tools to be more competitive and position ourselves among the most important healthcare hubs in the world,” he explained, adding that part of his task is to represent the “transversality” of the sector, a feature that the diversity of the new board of directors aims to highlight.

For his part, Amat analyzed that “4 years ago we accepted the challenge of making the merge between CataloniaBio and the HealthTech Cluster a reality, we think we have achieved it and that we have gained visibility and leadership”. He also concluded. “We have contributed to the sector’s sustained, balanced and solid growth, which allows us to be optimistic about the new stage that begins today”. 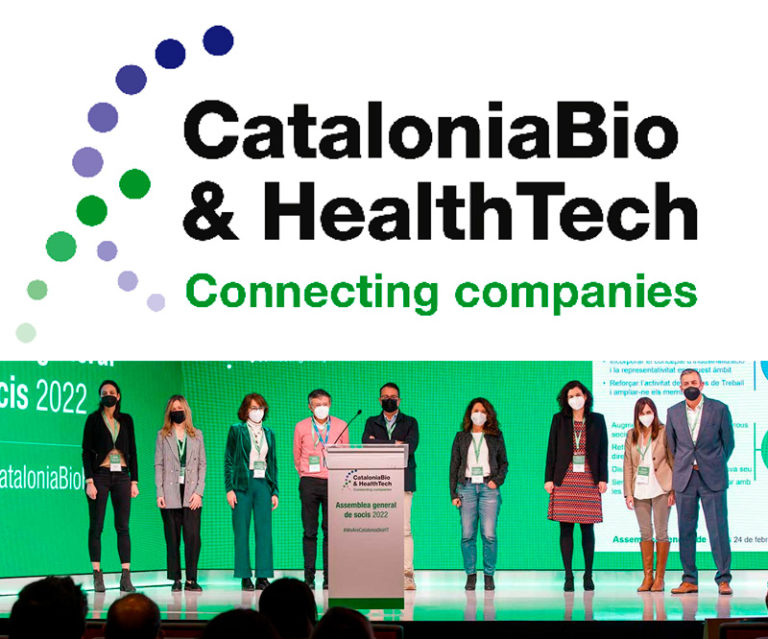 CataloniaBio &HealthTech is the entity that represents companies in the biomedicine and health sector in Catalonia.   Its mission is divided into four lines of activity:
– Defend and promote the interests of the healthcare business network. – Increase the competitiveness and the size of the businesses in order to generate new products and services that improve people’s health. – Create value in the sector by promoting innovation, entrepreneurship and networking. – Position Catalonia as one of the main health hubs in the world.
One of the strengths of the entity is that it reflects the transversality of the sector and accelerates the creation of synergies between start-ups and companies that develop products (biopharmaceuticals, medical technologies and digital health), service companies (scientific and non-scientific), investors, research centers and hospitals.

Get in touch with us

We are here to answer any questions

Menu
We inform you that we use first- and third-party cookies in order to improve the performance of the page and for analytical and advertising purposes. If you want more information or would like to manage them, please go to the
Cookie Settings.
I ACCEPT COOKIES
WE CARE ABOUT YOUR PRIVACY
You can set your consent preferences and determine how you want your data to be used according to the purposes detailed below.
Uncheck all ACCEPT ALL
These cookies are necessary for the basic operation of the website and, therefore, are always active. They include cookies that remember the actions you make when browsing the website in a single session or, if requested, from session to session. They help in online shopping processes, in addition to providing assistance in security matters and in compliance with regulations.

Analytical cookies allow us to improve the web browsing experience and to provide the administrator with statistical information such as the number of visitors or how users use our platform.

They allow the effective management of advertising space on our website, tailoring advertising content to the content of the requested service or to your use of our website, which are carefully handled either by us or by third-parties. It allows us to find out your browsing habits on the Internet and show advertising related to your browsing profile.

Remember that you can always change your preferences by going to our Cookies Policy
SAVE PREFERENCES
×ATENCIÓ: Cookies no configurades en l'idioma actual. Revisa la teva configuració al plugin, gràcies!